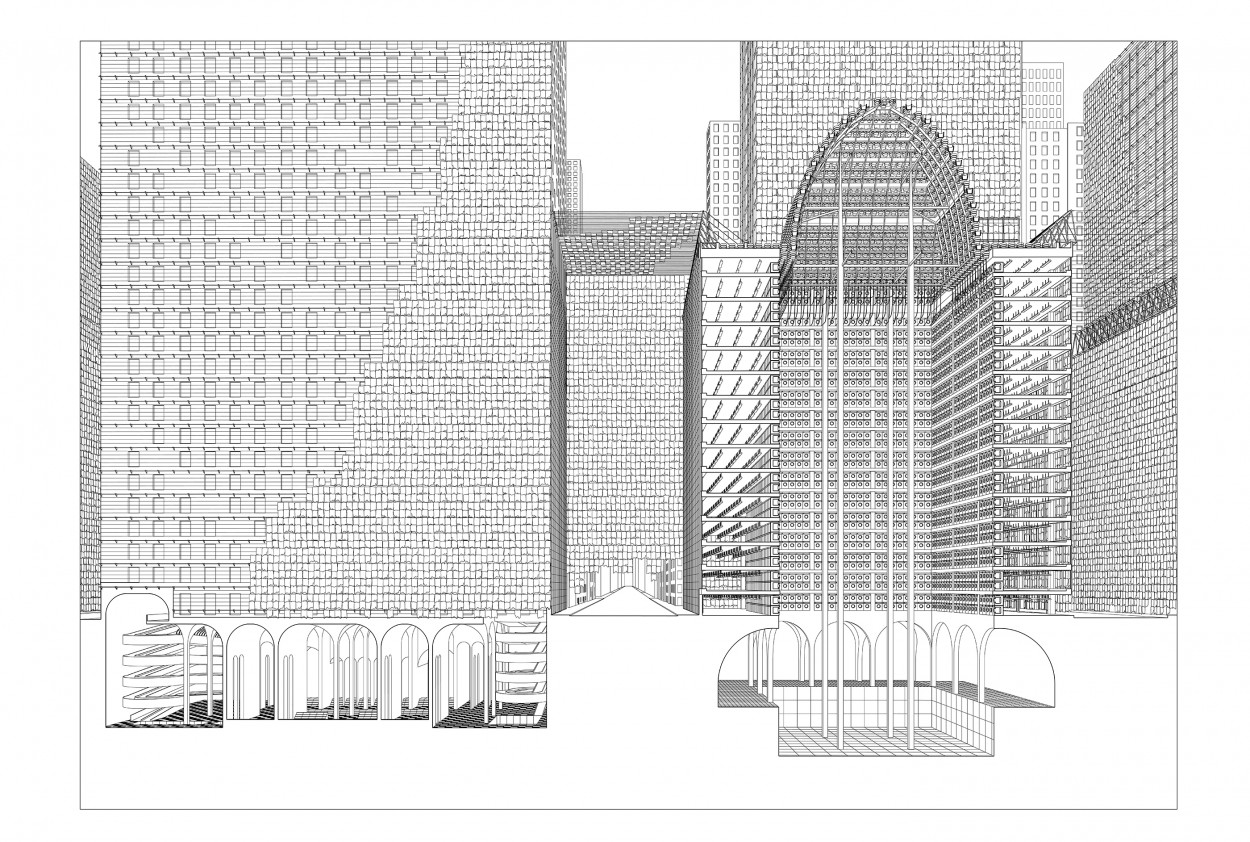 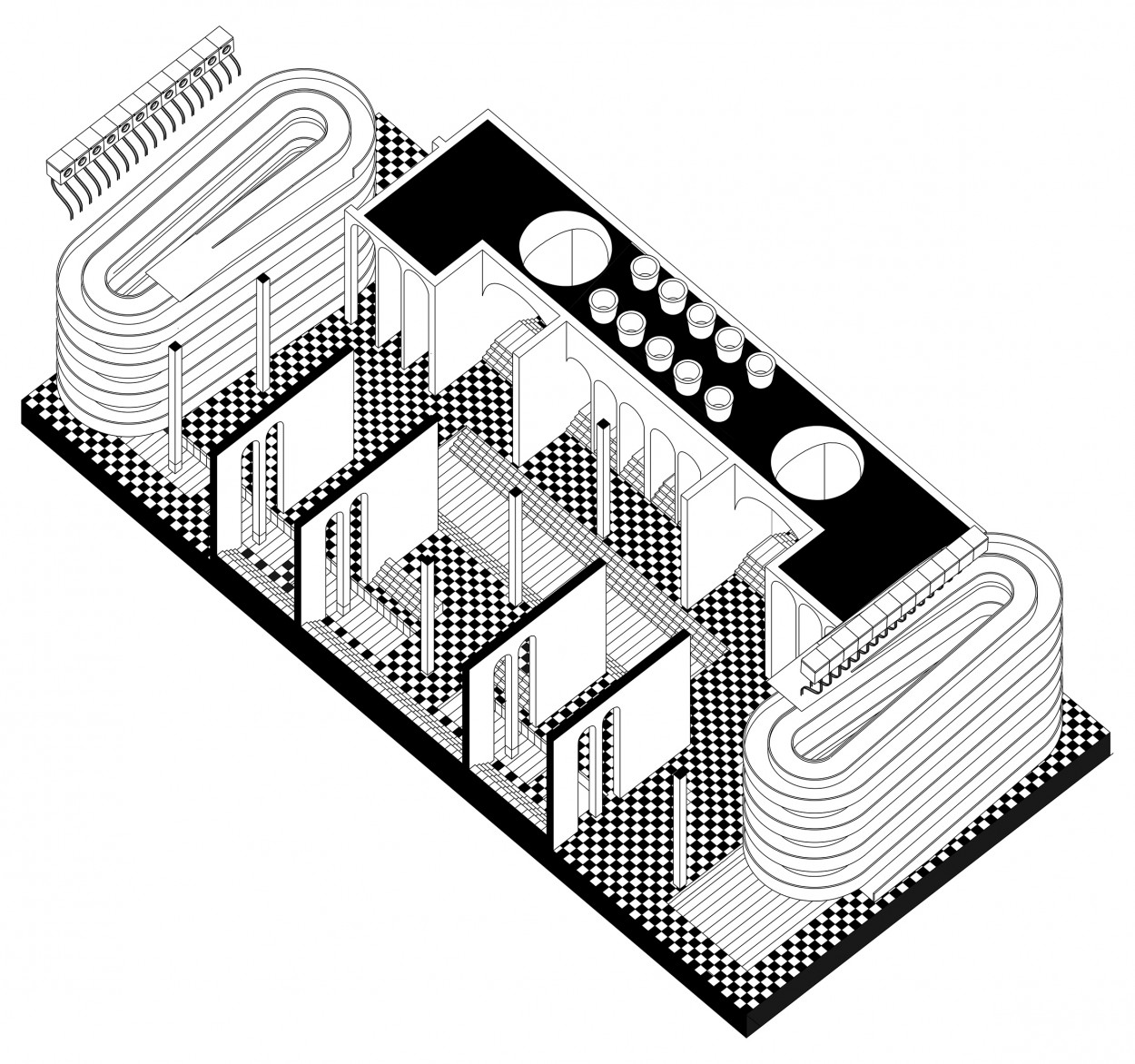 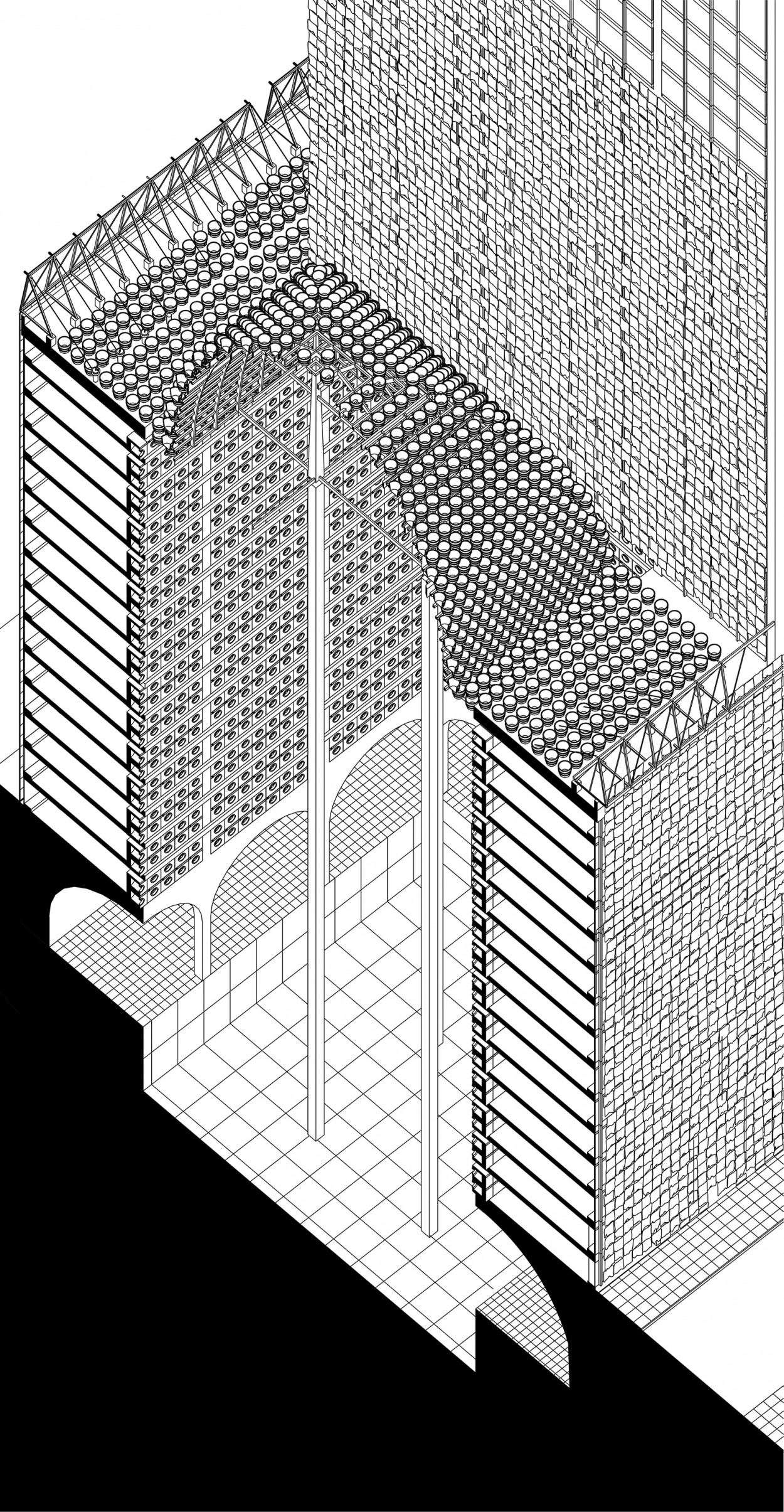 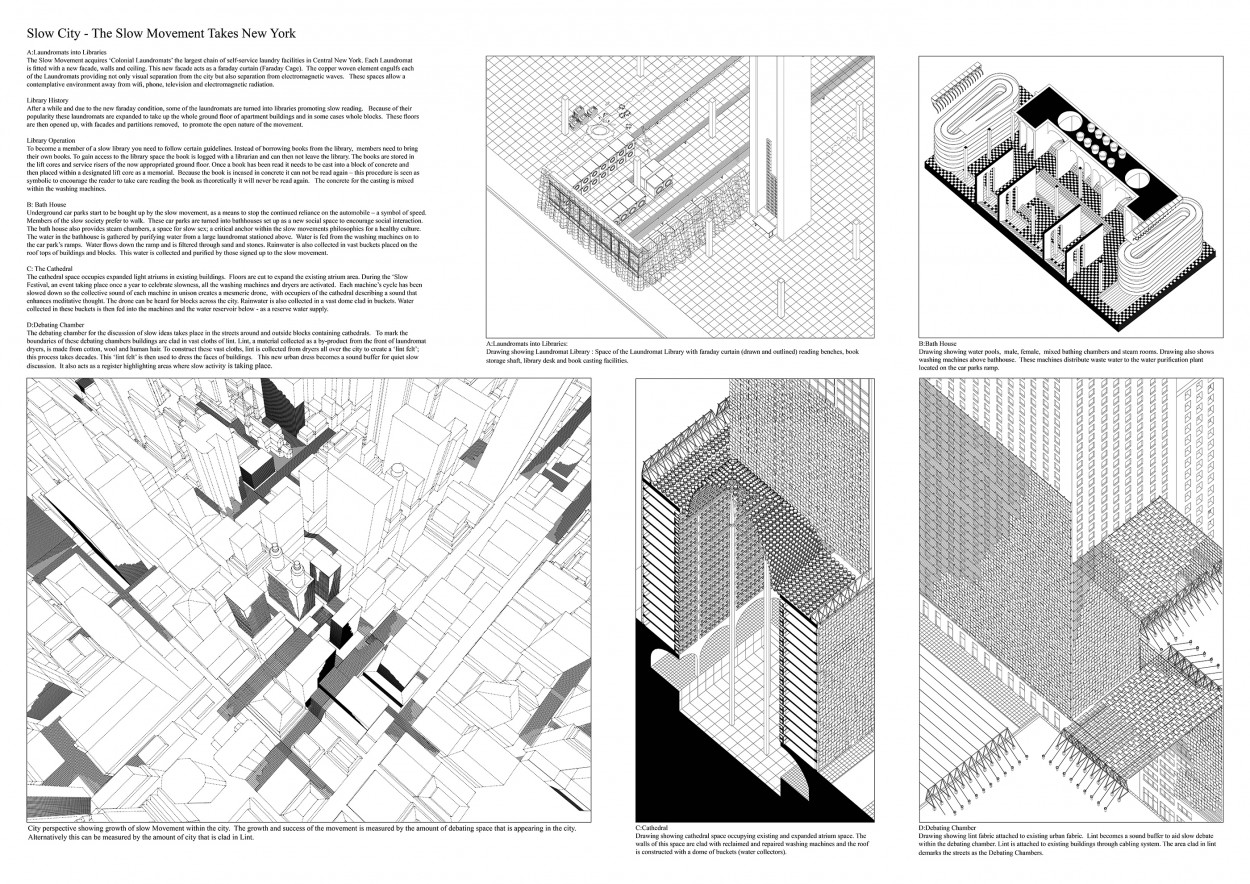 Slow City - The Slow Movement Takes New York, proposes a speculative architecture, urban design and narrative for a future New York City. The project proposes a city that is slowly being taken over by the famous Slow Movement as a way to counter act certain occupaitional behavoiurs that priritieses speed over presonal interation and encounter within the city. The project was a competition entry for City Vision 2012. The deign was developed as a colaboration between Matthew Butcher Pascal Bronner, Tom Noonan and Chryssanthi Perpatidou.

A:Laundromats into Libraries
The Slow Movement acquires ‘Colonial Laundromats’ the largest chain of self-service laundry facilities in Central New York. Each Laundromat is fitted with a new facade, walls and ceiling. This new facade acts as a faraday curtain (Faraday Cage). The copper woven element engulfs each of the Laundromats providing not only visual separation from the city but also separation from electromagnetic waves. These spaces allow a contemplative environment away from wifi, phone, television and electromagnetic radiation.

Library History
After a while and due to the new faraday condition, some of the laundromats are turned into libraries promoting slow reading. Because of their popularity these laundromats are expanded to take up the whole ground floor of apartment buildings and in some cases whole blocks. These floors are then opened up, with facades and partitions removed, to promote the open nature of the movement.

Library Operation
To become a member of a slow library you need to follow certain guidelines. Instead of borrowing books from the library, members need to bring their own books. To gain access to the library space the book is logged with a librarian and can then not leave the library. The books are stored in the lift cores and service risers of the now appropriated ground floor. Once a book has been read it needs to be cast into a block of concrete and then placed within a designated lift core as a memorial. Because the book is incased in concrete it can not be read again – this procedure is seen as symbolic to encourage the reader to take care reading the book as theoretically it will never be read again. The concrete for the casting is mixed within the washing machines.

B: Bath House
Underground car parks start to be bought up by the slow movement, as a means to stop the continued reliance on the automobile – a symbol of speed. Members of the slow society prefer to walk. These car parks are turned into bathhouses set up as a new social space to encourage social interaction. The bath house also provides steam chambers, a space for slow sex; a critical anchor within the slow movements philosophies for a healthy culture.
The water in the bathhouse is gathered by purifying water from a large laundromat stationed above. Water is fed from the washing machines on to the car park’s ramps. Water flows down the ramp and is filtered through sand and stones. Rainwater is also collected in vast buckets placed on the roof tops of buildings and blocks. This water is collected and purified by those signed up to the slow movement.

C: The Cathedral
The cathedral space occupies expanded light atriums in existing buildings. Floors are cut to expand the existing atrium area. During the ‘Slow Festival, an event taking place once a year to celebrate slowness, all the washing machines and dryers are activated. Each machine’s cycle has been slowed down so the collective sound of each machine in unison creates a mesmeric drone, with occupiers of the cathedral describing a sound that enhances meditative thought. The drone can be heard for blocks across the city. Rainwater is also collected in a vast dome clad in buckets. Water collected in these buckets is then fed into the machines and the water reservoir below - as a reserve water supply.

D:Debating Chamber
The debating chamber for the discussion of slow ideas takes place in the streets around and outside blocks containing cathedrals. To mark the boundaries of these debating chambers buildings are clad in vast cloths of lint. Lint, a material collected as a by-product from the front of laundromat dryers, is made from cotton, wool and human hair. To construct these vast cloths, lint is collected from dryers all over the city to create a ‘lint felt’; this process takes decades. This ‘lint felt’ is then used to dress the faces of buildings. This new urban dress becomes a sound buffer for quiet slow discussion. It also acts as a register highlighting areas where slow activity is taking place.

C:Cathedral
Drawing showing cathedral space occupying existing and expanded atrium space. The walls of this space are clad with reclaimed and repaired washing machines and the roof is constructed with a dome of buckets (water collectors).